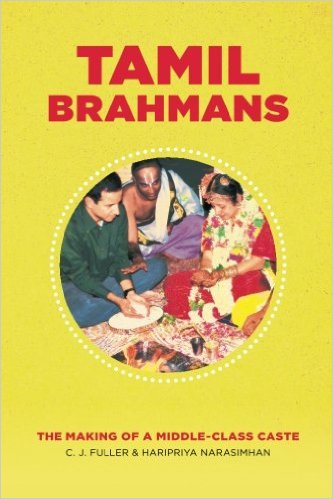 This is a fascinating, scholarly work – yet eminently readable – on how Tamil Brahmans, who for centuries were a traditional, mainly rural, caste elite, occupying the throne of a caste order, transformed over time into a modern, urban, middle class community.

In this clearly first exhaustive book on the subject, C.J. Fuller and Haripriya Narasimhan combine original research and extensive study to explain how Tamil Brahmans embraced education and job opportunities during the British Raj to become the middle class they are today, with a strong presence particularly in the booming private sector.

In this they were “an unusual social group” which knew how to remain in touch with the past even as it climbed the ladder of economic success – something that, the authors point out, the Telugu Brahmans or the Kerala Namboodiris failed to do. The Tamil Brahmans are a good example of “how and why privileged status within a hierarchical society can be perpetuated in the face of major social, cultural, economic, political, and ideological changes”.

The number of Brahmans in Tamil Nadu, according to the 2011 Census, is about 1.78 million, of whom Tamil Brahmans account for 1.40 million. Overall, in India and abroad, this must be 1.85 million. Today, the vast majority of them have been drawn into the urban middle class, leaving behind their once exclusive quarters in villages known as “agraharams”.

The Brahmans’ role as the custodian of Sanskritic Hinduism has always been salient for their caste status. This eventually pitted them against the Dravidian mass in Tamil Nadu, rapidly reducing the Tamil Brahmans’ once influential hold over politics into a virtual zero. But instead of going into a shell, the Tamil Brahmans adapted more easily to newer opportunities and saw modernity as less threatening to their social and cultural traditions. In the process, an old caste elite got transformed into a modern middle class group.

Among the Tamil Brahmans who rose to prominence in both an early era and later included T. Muthusamy Iyer, the first Indian judge in the Madras High Court, lawyers V. Bhashyam Iyengar, S. Subramania Iyer and C.P. Ramaswamy Aiyar, engineers S.A. Subrahmanyar Aiyar and V. Ganesh Iyer, mathematician Srinivasa Ramanujan, scientists and Nobel laureates C.V. Raman (1930), his nephew Subrahmanyan Chandrasekhar (1983) and Venkatraman Ramakrishnan (2009). That Tamil Brahmans bagged three Nobel prices should not be surprising because the community took to law, science and civil service in a big way – and then made its mark in many other professions.

The Tamil Brahmans have also changed in many other ways. Although they tend to marry within the community, Iyers (or Shaivites) are seen as less conservative than Iyengars (or Vaishnavites). Their family sizes have shrunk, and parents rarely worry if both their children are daughters. Young Tamil Brahman women have more control over their matrimonial affairs. And today, Tamil Brahmans are dispersed across India and abroad, mainly in urban centres, and rural Tamil Nadu is no longer their homeland in any meaningful sense.