NEW DELHI–Even as the LGBT community in India has been fighting a legal battle asking for Section 377 of the Indian Penal Code to be revoked on grounds that it violates human rights, here comes a first-of-its-kind modelling agency for transgenders.

The idea, according to Delhi-based transgender activist Rudrani Chettri, evolved out of a “feeling of frustration seeing many young beautiful transgenders who are made to feel ugly” from a young age. 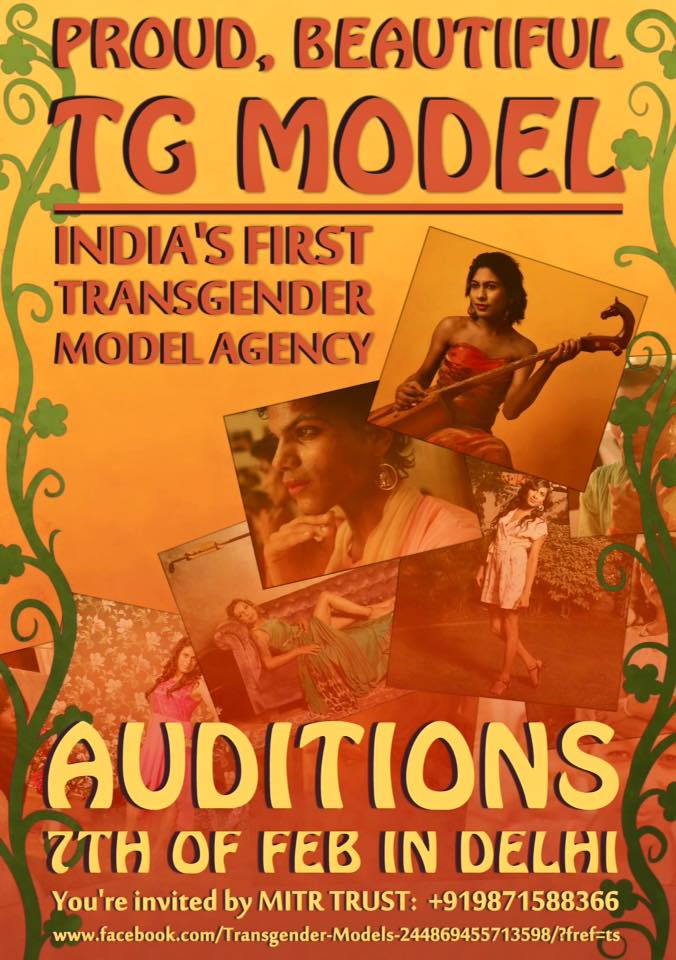 “I was one of them and there was no such option open to me when I was young. It’s also a desperate desire amongst us to be seen and to be accepted into the mainstream society and to get jobs like everyone else. I hope this creates a spark in young transgenders to follow their dreams,” Chettri, founder of Mitr Trust, a city-based lesbian, gay, bisexual, and transgender (LGBT) charity, who is setting up this agency, told IANS.

Chettri feels that time and again, the community has been a victim of prejudice in society, in the workplace and among their families and local communities, which ultimately leads them to begging or sex work to make a living. She hopes the platform helps in an image overhaul.

“This is an effort by the transgender community to improve our social and personal image, and to raise awareness about the serious funding crisis affecting us. We are not men, we are not women. We are transgenders and are proud of it,” Chettri said.

As part of its activities, the agency aims is to identify five top models and help them launch into mainstream fashion media. They have also kept a pan-India audition and teamed up with fashion stylist and photographer Rishi Raj, who will work towards getting them a spread in a leading fashion magazine.

A walk-in model audition is scheduled for Sunday and the chosen models will go through a photo shoot.

“I want this photo shoot to enhance and highlight the natural androgynous beauty of the transgender/hijra community,” Raj told IANS.

He felt the concept of a modelling agency for transgenders may do well given how the “world is opening up” to them.

“The greatest example in the recent past being Caitlyn Jenner (international celebrity Bruce Jenner, who underwent sex transition). Fashion takes great pride in breaking boundaries and creating new trends; so in a Utopian scenario, the modelling agency should do well. This activity will create awareness about the Indian transgender community,” he added.

In addition, the Mitr Trust has been working with an Indian-British team of filmmakers for the last one year to closely document the lives and struggles of transgenders. The organisation however currently lacks money to support the dream.

A crowdfunding campaign has been started on the BitGiving online platform to finance the endeavour.

“We want to raise awareness for the funding. This will allow us to carry on working with the community as we have not been able to pay our workers for eight months now, nor have we been able to provide condoms to high risk sex workers,” said Chettri.

On Tuesday, the LGBT community rejoiced at the Supreme Court’s decision to refer to a constitution bench a batch of curative petitions seeking a relook at its earlier verdict upholding the validity of Section 377 of the Indian Penal Code that criminalises homosexuality.