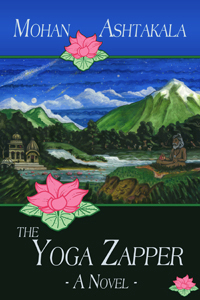 DENVER, CO–While most fantasy novels are based on Old English mythology (Lord of the Rings) or ancient Nordic traditions (Thor), The Yoga Zapper is inspired by the authentic narratives of yoga.

“I have taken a lot of care to accurately present the authentic stories from Indian mythology in the form of a compelling fantasy, with modern characters who have their own fascinating stories to tell,” says Mohan Ashtakala, author of The Yoga Zapper: A Novel.

What does the end of Kali Yuga look like? How about Satya yuga, the beginning age? And imagine Kalki Avatar descending from the heavens to lead the forces of good against evil at the end of time.

By chanting mantras from a Sanskrit text discovered in a Himalayan temple, two American brothers, transported to the opposite ends of time, are forced to face their weaknesses, grow, mature, and to seize their destinies. Their adventures culminate at the end of Kali Yuga, when Kalki Avatar’s armies battle an evil ruler bent on world domination, in a war reminiscent of the Ramayan; featuring mystical weapons, flying vimanas, powerful deities and magical weapons.

Ashtakala was born in Bangalore, but raised in the West. His vision is to entertain not only a Western audience, but also to the Indian reader, especially the youth, who may not have had much exposure to the traditional narratives of India. What he has done is to inform and educate, in such a compelling and thoroughly interesting manner, that the reader will imbibe many of the stories and teachings of Hinduism without even realizing it.

Ashtakala is an initiated Hindu Vaishnava priest. He studied at McGill University and worked as editor-in-chief for a regional newspaper based in Denver Colorado for fourteen years. He has presented Hinduism at schools, churches and interfaith conferences. His goal is to present the authentic narratives of the Hindu tradition by way of modern page-turning novels. He published the Himalayan News, a regional publication based in Denver, CO for fourteen years. He currently lives in Calgary, Canada.