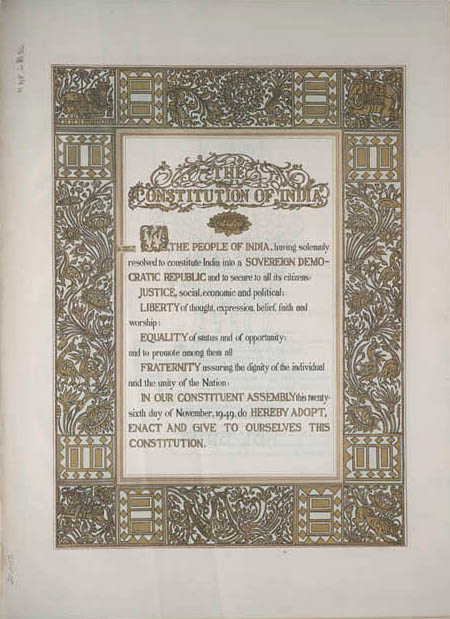 The Indian Constitution, the longest of any sovereign nation in the world, provides a comprehensive framework to guide and govern the country, keeping in view her social, cultural and religious diversity.

A distinctive document with many extraordinary features, the Constitution of India is the longest written constitution of any sovereign nation in the world. The original text of the Constitution contained 395 articles in 22 parts and eight schedules. It came into effect on January 26, 1950, the day that India celebrates each year as the Republic Day. The number of articles has since increased to 448 due to 100 amendments.

The Constitution was framed by the Constituent Assembly of India, established by the members of the provincial assemblies elected by the people of India. Dr Sachidanand Sinha was the first president of the Constituent Assembly. Later, Dr Rajendra Prasad was elected its president. Dr BR Ambedkar, the chairman of its Drafting Committee, is considered the chief architect of the Indian Constitution which provides a comprehensive and dynamic framework to guide and govern the country, keeping in view her unique social, cultural and religious diversity. It establishes the main organs – executive, legislature and judiciary, defining their powers, demarcating their responsibilities and regulating the inter-se relationship. It inter alia lays down the basic structure of governance and the relationship between the government and the people. The rights and duties of citizens are also spelt out. The Constitution applies to the state of Jammu and Kashmir with certain exceptions and modifications as provided in Article 370 and the Constitution (application to Jammu and Kashmir) Order, 1954. It is the mother of all other laws of the country. Every law enacted by the Government has to be in conformity with the Constitution.

The preamble to the Constitution declares India to be a Sovereign Socialist Secular Democratic Republic and a welfare state committed to secure justice, liberty and equality for the people and for promoting fraternity, dignity of the individual and unity and integrity of the nation. The objectives specified in the preamble constitute the basic structure of the Indian Constitution which cannot be amended. The opening and last sentences of the preamble: “We, the people… adopt, enact and give to ourselves this Constitution” signifies the power is ultimately vested in the hands of the people.

Although Article 1 of the Constitution says India shall be a Union of States, the Constitution provides for a federal structure with clear division of powers between the Centre and the states, each empowered by the Constitution to enact and legislate within their sphere of activity. The seventh schedule contains three legislative lists which enumerate subjects of administration viz union, state and concurrent legislative lists. The Central Government enjoys exclusive power to legislate on the subjects mentioned in the Union list. The state governments have full authority to legislate on the subjects of the state list. And both the Centre and the state can legislate on the subjects mentioned in the concurrent list with the residuary powers vested in the Central Government. It can be said that India has cooperative federalism. The Constitution provides for the Parliamentary form of Government with a bicameral legislature at the Centre consisting of Lok Sabha (Lower House of Parliament) and Rajya Sabha (Upper House of Parliament).While the Lok Sabha consists of the elected representatives of people, the Rajya Sabha consists of representatives elected by the state legislative assemblies. The President is the nominal head of the state and the Parliament. In actual practice, the Prime Minister, aided by the Council of Ministers, heads the executive and is responsible for governance.

An impartial judiciary, independent of the legislature and the executive, is one of the main features of the Constitution. The Supreme Court of India is the highest court of the country and acts as guardian of the Constitution and serves as the final court of appeal. Each state has a High Court as its highest court. Under powers of judicial review, the Supreme Court and High Court can declare a law as unconstitutional or ultra vires if it contravenes any provisions of the Constitution. This power of judicial review constitutes a middle path between the American judicial supremacy on one hand and British Parliamentary supremacy on the other. In order to ensure the impartiality of the judiciary, the judges are appointed by a process free of influence of the executive. The judges can only be removed by a rigorous process of impeachment to be approved by both the houses of the Parliament.

The Constitution vests many fundamental rights in citizens. These are (i) Right to Equality, (ii) Right to Freedom, (iii) Right against Exploitation, (iv) Right to Freedom of Religion, v) Cultural and Educational Rights and vi) Right to Constitutional Remedies. These rights are justiciable and an individual can move the Supreme Court or the High Courts if there is an encroachment on any of these rights. However, Fundamental Rights in India are not absolute. Reasonable restrictions can be imposed. By 42nd Amendment in 1976, fundaments duties were added in the Constitution to remind people that while enjoying their right as citizens, they should perform their duties for rights and duties are correlative.

Another novel feature of the Constitution is that it contains a chapter on the directive principles of state policy, that are in the nature of directives to the Government to implement them for establishing social and economic democracy in the country. Though not justiciable, these principles are considered fundamental in the governance of the country.

There are many autonomous institutions set up under the Constitution which perform a key role, such as, Election Commission (responsible for holding free and fair elections), Public Service Commission (responsible for selection to main government services) and an Auditor General (for independent audit of accounts of the government and its agencies).

One of the strengths of the Constitution is that it is a dynamic instrument that can evolve with time either by its interpretation or amendment. On paper, an amendment to the Constitution is a difficult affair, and normally needs, at least, two-thirds of the Lok Sabha and Rajya Sabha to pass it. However, the Constitution of India is one of the most frequently amended constitutions in the world so as not to stand in the way of the growth and development of the nation and her people.

The success of the Indian Constitution, for a country as diverse and complex as India, continues to intrigue, impress and inspire experts around the world.