SALEM, MA — The Peabody Essex Museum (PEM) presents Imagine, South Asia, an action-packed weekend celebrating South Asian culture and heritage on February 6 and 7. Here is a complete guide and schedule for the weekend.

Part of PEM’s Present Tense Initiative, this special weekend celebrates the eight nations and more than 5,000 years of human history that comprise South Asia. The region’s rich and diverse artistic heritage will be explored through the unveiling of an award-winning contemporary installation by Anila Agha, a writing workshop with National Book Award finalist Carla Power, the U.S. premiere of the BBC documentary Treasures of the Indus and a dance party with renowned London DJ Ben “the Bee” Taylor and the UK arts collective House of Honey.
“South Asia penetrates almost every aspect of PEM,” says PEM Curator of South Asian Art Sona Datta. “It’s part of the DNA of this museum and so we’re taking a full weekend to look at the diversity of art, culture and people that make up this amazing region of the world.” 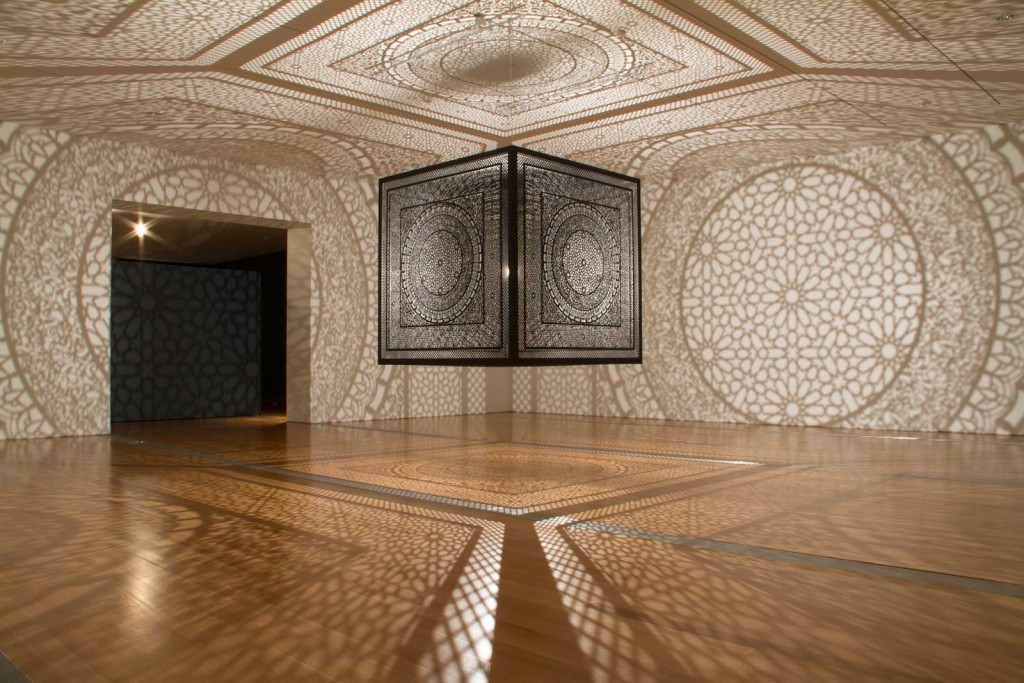 The Peabody Essex Museum presents Intersections, an immersive single-room installation that conjures a cross-cultural intersection of Spain’s Alhambra Palace, a site where a thousand years ago Islamic and Christian traditions thrived in coexistence.
FILM

Join us for the U.S. premiere of the BBC documentary Treasures of the Indus, written and narrated by PEM Curator of South Asian Art Sona Datta. Pakistan Unveiled looks at the long, multi-faith narrative of the region’s past from the early cities in the Indus Valley, Pakistan’s rich Buddhist history to the garden city of Mughal Lahore. Welcome by Datta and exhibition artist Anila Agha precedes film.

DROP-IN ART MAKING
1–4 pm | Atrium
A multicultural sensibility characterized the reign of Mughal Emperor Shah Jahan, who commissioned the Taj Mahal in 1632 for his beloved wife, Mumtaz Mahal. Create your own design with repeated symbols based on the word “love” written in scripts from a variety of cultures.

Treasures of the Indus, Episode 2: The Other Side of the Taj Mahal

The second episode looks at the story of the people of the Mughal Empire who melded their Persian heritage with the indigenous Rajput traditions of India to create an aesthetic that culminated in the impossible grandeur of the great Mughals.

India Today: Identity at the Intersection of Cultures

Dance the night away with U.K. arts collective House of Honey as they present a musical extravaganza with visuals in response to Intersections, a single-room immersive exhibition by Anila Quayyum Agha. Enjoy renowned DJ Ben “the Bee” Taylor’s intoxicating mix of music inflected with South Asia’s many musical traditions — from traditional ragas and the ecstasy of Sufi poetry set to music to upbeat Bollywood rhythms. Tickets at pem.org/calendar. Limited tickets at the door.

Treasures of the Indus, Episode 3: Of Gods & Men

Introduced by Spike Geilinger (director and cameraman), the third and final episode of the series looks at the development of Hinduism from the earliest rock-cut shrines to the great temple cities of Southern India.

Where can Islam and the West come together? Where can the traditional meet the modern, the secular touch the divine, exclusion become understanding? Join National Book Award finalist Carla Power (If The Oceans Were Ink: An Unlikely Friendship and a Journey to the Heart of the Quran) and Intersections artist Anila Agha for a conversation about bringing together opposing forces and inhabiting a sacred space. Moderated by The Tannery Series. Book signing with Power follows the discussion.

Reservations required by February 5 at pem.org/calendar

Many often feel caught between opposing powers — past and present, alienation and belonging, male and female, shadow and light. In this workshop, these tensions are tapped as a source of creative energy for writing. Guided by National Book Award finalist Carla Power, Intersections artist Anila Agha and Tannery Series founder Kirun Kapur, participants work toward creating art that accommodates contradiction and makes space for multiple possibilities. The program is focused on writing and spending time with Agha in her installation. Participants are encouraged to attend Sunday’s film and discussion before workshop.
FREE WITH ADMISSION UNLESS INDICATED ABOVE | SALEM RESIDENTS FREE WITH ID
MORE INFORMATION AT PEM.ORG/CALENDAR

PHOTO CREDITS
1. PEM Curator of South Asian Art Sona Datta during the making of Treasures of the Indus. Photo by BBC/Ben Taylor/Tern TV

The Present Tense initiative is an extension of PEM’s contemporary art program and celebrates the central role that creative expression plays in shaping our world today. The Present Tense Initiative engages leading creative agents and thinkers to cultivate innovative experiences fueled by the intersection of cultures, disciplines and technologies. By encouraging innovation and fostering new forms of creativity, PEM’s initiative seeks to push the boundaries of what a museum experience can be.

ABOUT THE TANNERY SERIES

The Tannery Series is an arts organization that presents serious literature in a manner that makes it fresh, accessible and fun. Originally co-founded in 2010 by poet Kirun Kapur and writer Dawne Shand, the series has focused on bringing authors to Boston’s North Shore whose writing confronts the world in essential and curious ways. Running such memorable events as “Love, Lust and Loathing” and “Are You Cool?” — often for standing-room-only audiences — the series is known for its smart, combustible literary programming. In 2013, The Tannery Series began collaborating with the Peabody Essex Museum to provide literary programs that complement the museum’s exhibitions. Now in its fifth season, The Tannery Series is proud to have showcased a wide range of literary voices and ideas — from Pulitzer Prize winning poets to avant-garde crime novelists.
ABOUT THE PEABODY ESSEX MUSEUM

Over the last 20 years, the Peabody Essex Museum (PEM) has distinguished itself as one of the fastest-growing art museums in North America. Founded in 1799, it is also the country’s oldest continuously operating museum. At its heart is a mission to enrich and transform people’s lives by broadening their perspectives, attitudes and knowledge of themselves and the wider world. PEM celebrates outstanding artistic and cultural creativity through exhibitions, programming and special events that emphasize cross-cultural connections, integrate past and present and underscore the vital importance of creative expression. The museum’s collection is among the finest of its kind boasting superlative works from around the globe and across time — including American art and architecture, Asian export art, photography, maritime art and history, Native American, Oceanic and African art. PEM’s campus affords a varied and unique visitor experience with hands-on creativity zones, interactive opportunities and performance spaces. Twenty-four noted historic structures grace PEM’s campus, including Yin Yu Tang, a 200-year-old Chinese house that is the only such example of Chinese domestic architecture on display in the United States, and the Phillips Library, which holds one of the nation’s most important museum-based collections of rare books and manuscripts. HOURS: Open Tuesday-Sunday, 10 am-5 pm, and the third Thursday of every month until 9 pm. Closed Mondays, Thanksgiving, Christmas and New Year’s Day. ADMISSION: Adults $18; seniors $15; students $10. Additional admission to Yin Yu Tang: $5. Members, youth 16 and under and residents of Salem enjoy free general admission and free admission to Yin Yu Tang. INFO: Call 866‐745‐1876 or visit pem.org