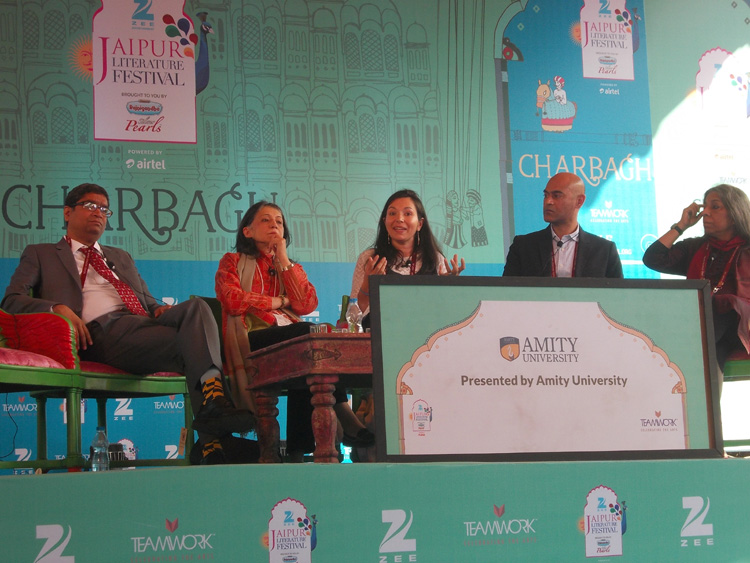 JAIPUR– Much of the toxic memories and legacies around Partition in 1947, which continue to create bad blood even seven decades later arise out of misconceptions about its reasons, dynamics, and processes and its important to clarify these so both India and Pakistan move beyond assigning blame to healing, say some historians of the event.

It was also contended that Partition was not necessarily inevitable, the violence it entailed doesn’t seem to have been elaborately planned and even shocked leaders on both sides though they had contributed to it with their careless, and inflammatory statements, while there are many aspects that have not received the level of attention they should, such as the effect on people outside the three major communities and the areas like Punjab and Bengal that are usually focused upon.

At a session titled “The Great Partition” at the Jaipur Literature Festival on Sunday, Pakistani-American historian Ayesha Jalal, who has argued Partition was one of the possible outcomes being negotiated, said the Muslim League’s March 23, 1940 resolution calling for a separate homeland, was part of its movement to settle the question of minority rights but noted it ended up aggravating the issue instead of solving it.

“Minority rights is a legacy of Partition, and it is an issue in all three nations,” she said.

Writer and journalist Nisid Hajari contended that the genocide of Partition was either triggered by being misguided by a political figure, or falling prey to madness but in either instance, people could not fully explain their actions, and nobody admitted responsibility.

British historian Yasmin Khan noted the demand for Pakistan has been conflated with the violence that followed.

“They’ve been put on the same track… disentangling both is difficult but important,” she maintained.

US-based history professor Venkat Dhulipala noted the event had seen emergence of a “hostage population” theory or that minority rights can be ensured by a certain terror and such rhetoric was widespread then, as was talks about transfers of populations, made by people like Mohammad Ali Jinnah and even B.R. Ambedkar.

“The violence can be understood by the incendiary and passionate statements made in the public sphere,” he said.

But Jalal noted that most of the violence was not about religion as is commonly thought, but about property or its forcible seizure from those who could not resist it.

Intervening here, publisher and writer Urvashi Butalia highlighted how patriarchal Indian society enabled violence and as families were already violent towards their women, it was just the degree and the targets of violence that changed during Partition.

She also suggested that it was a mistake to define minorities in purely religious terms during Partition, since many other minorities were also affected, including Dalits, hijras and women, or even inmates of mental asylums.

On the responsibility for Partition, Hajari said even Mahatma Gandhi did not have political power to stop it though he had tried to tamp down on the violence.

“I hesitate to assign percentages but the Congress made several mistakes and could have been more generous politically.”

Khan said it should be known that the leaders then were also human and faced many pressures and compulsions and that is why they couldn’t compromise. “There were everal missed opportunities. The Cabinet Mission Plan was one…,” she said.

Jalal, however, maintained it was imperative “to go beyond finger-pointing to healing”.

She noted that a recent poll in Pakistan had 39 percent of respondents saying they were helped by a Hindu or a Sikh during the Partition,but these stories have not come into the mainstream narrative yet. “Without them, the unimaginable violence would have been unconscionable.”

Hajari also said literature and art can also approach the matter better than straightforward histories, while Butalia also suggested that these break away from traditional historical narratives and allow for interpretations of the Partition story through a multitude of perspectives.

My mother is the reason I’m here now: Anuradha Roy

Jaipur Literature Festival comes of age, time to get over ‘darlings of social media’