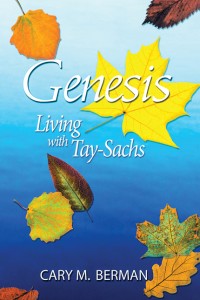 Cary M. Berman arrived in the world 52 years ago already saddled with a rare neurological disease, though neither he nor his parents knew. 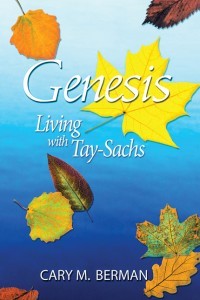 He was well into adulthood before it was confirmed that he suffered from Late-Onset Tay-Sachs (LOTS), a genetic disorder that leads to damaged cells and a steady deterioration of muscle control. He was 1 of 250 in the world when diagnosed with LOTS, and it explained lots of medical challenges that he encountered in his life.

Usually, symptoms start with clumsiness and weakened leg muscles. Over time, there is more loss of mobility, which can lead to the need for a cane or wheelchair. Speaking and swallowing difficulties also can emerge. There are also psychiatric consequences in 50 percent of the patients with LOTS.

“Basically, my medical challenge has brought imbalance and chaos to every aspect of my life,” says Berman, who tells his story in “Genesis: Born with Tay-Sachs” (www.livingwithtaysachs.com). “My challenge has been to bring balance back into my life.”

Like many who suffer from Tay-Sachs, Berman concentrates on strategies for managing life with the disease because a cure does not exist, though research is ongoing.

Tay-Sachs is caused by a missing enzyme, hexosamindase A. Three forms of the disease exist, according to the National Tay-Sachs and Allied Diseases Association. They are classic infantile, a fatal version where babies show symptoms at about six months; juvenile, which most often appears between ages 2 and 5; and late-onset, the version Berman has, where the symptoms usually appear in late adolescence or early adulthood, though can appear later.

Berman says he has been able to do battle with his medical condition with the help of his family, friends and faith. His stubbornness also doesn’t hurt.

“When someone tells me I can’t do something, I want to do it,” says Berman, who worked as an assistant public defender in Illinois for 27 years before his disease sidelined him.

He hopes that by sharing his experience, he can inspire others who face difficulties.

“Everyone in life has at least one challenge to address,” Berman says. “It might have to do with health, finances, family or something else. But I think there are some common approaches that apply for overcoming adversity of any type.”

He offers these suggestions:

• Take control. This is no time to accept defeat. “I believe in taking active control of your life rather than approaching challenges in a passive fashion,” Berman says. “Don’t just sit back and let things happen to you. Yes, the challenge you face may be extremely difficult, but you need to be a catalyst in your own life, making the bad situation better.”

• Maintain a good mental attitude. Perhaps nothing is more important in dealing with challenges than mental attitude, Berman says. To nourish a positive attitude, he often pushes himself to attempt things outside his comfort zone, such as when he learned to rock climb in Thailand. “I realize not everyone will do something that that extreme,” he says. “But the key point to remember that it’s not about the activity, it’s about your attitude. Anything you can do that helps you keep a positive attitude is the right activity.”

• Embrace friends and family. Having a support network makes all the difference, because everyone needs others to lean on in times of trouble, Berman says. “Without a doubt, the most powerful and important relationship I have is with my wife, Carmen,” he says. “She is my best friend and most trusted confidant.”
But friends can come in all sizes, races, genders and backgrounds, and his certainly do, he says. “The great thing we do is listen to each other, which is the way you have a meaningful conversation,” Berman says.
“Listening isn’t the same thing as agreement. We sometimes disagree, but we maintain our respect.”