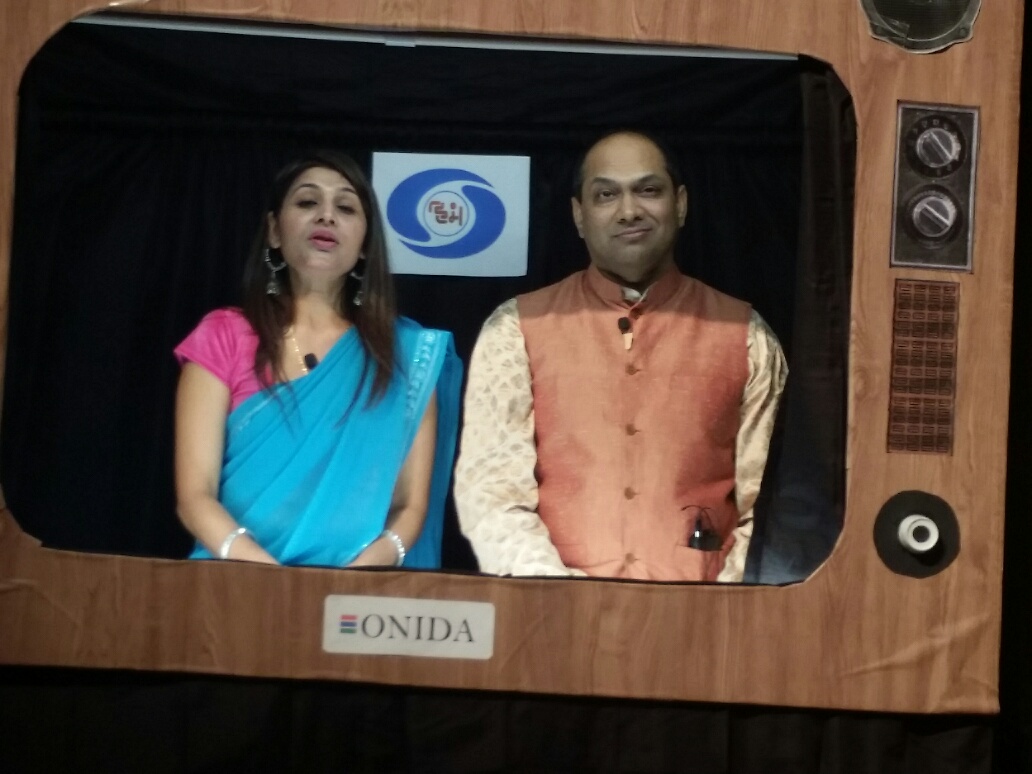 CONCORD, MA–Hindi Manch did it. Once again. It truly brought back memories from the past in India, refreshing faint recollections of the yesteryears’ popular sitcom—Yeh Joh Hey Zindagi— by re-enacting an episode on Sunday live at the Thoreau School auditorium in Concord, MA. (Photos by INDIA New England News) 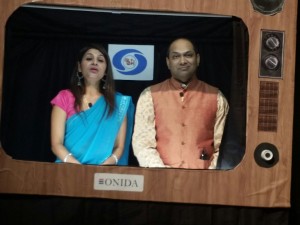 To complete the TV watching experience, Hindi Manch had beautifully created a TV set, with a great team of anchors who entertained the audience throughout with their wit and humor. The segments included the popular Chitrahar show with live singers and enactment of Yeh Joh Hey Zindagi with their amusing and engaging acts.

The TV script was written by Preetesh Shrivastava, president of Hindi Manch. He also directed this segment.

“Because we had multiple arts/items coming together we needed a story that pieced all these together,” said Anish Khanzode, who chaired this year’s Chitrahar program. “The script of the TV helped with just that and was written to give an experience of audience watching TV serials Chitrahaar and Ye Jo Hai zindagi.”

Yeh Joh Hey Zindagi, which was initially aired in 1984 and was Indian Television’s first comedy sitcom, is still considered a classic and has cult like following. The enactment of Yeh Joh Hey Zindagi worked mainly on two principles— relatability and humor. The show was penned by India’s leading satirists, Sharad Joshi and its title track was sung by Kishore Kumar. Brilliant performances by veterans like Satish Shah, Shafi Inamdar, Swaroop Sampat, and Rakesh Bedi elevated the show to unmatchable heights.

In Concord, Hindi Manch actors were able to recreate that Yeh Joh Hey Zindagi feel. The play’s emotional heart squarely centered on a couple’s relationship with each other. This husband-wife bonding was not sugary sweet and they did have their own share of bickering which made this lead couple so real and believable. Throw in the wife’s brother in the mix and you had recipe for hysterical situations.

This play was directed by Anish Khanzode under the guidance of Mohan Dali. It a nutshell, Hindi Manch’s Chitrahaar “Yeh Jo hai Geeton Ka Haar” was a unique concept that brought various art forms together.

The script of the play was adopted by Deepali Khanzoed from Doordarshan’s “Ye Jo Hai zindagi” sitcom.
“We presented the very first episode of Yeh Jo hai Zindagai that aired on Doordarshan in 1984,” said Khanzode. “The hind Manch team was honored and privileged to meet and talk with Dr. Swaroop Sampat, who played the lead role in the Sitcom.

“More than 300 people attended the program and we had an active waiting list going on and we could not accommodate many and were requested to announce the rerun of Chitrahaar,” Khanzode said.

Hindi Manch also introduced some new singers who made their public debut at a professional show.

“The purpose of Hindi Manch organization is to bring community together and closer to the language. Our Sa Re Ga ma Pa event does just that through music. For this purpose we reach out to new avenues to uncover new talent,” said Khanzode. “All the singers in Chaitrahaar were semi-finalist and finalist from Hindi Manch Saregamapa 2014 event which was judged by famous Bollywood singer Shri Suresh Wadekar. This is how Hindi Manch always brings new hidden talent to the community.”

Hindi Manch President Shrivastava said that in 2015 Hindi Manch is celebrating its 7th year and this year has been a great year for the organization.

“We did Sahitya Sammlean for literature lovers, Baal Yuva Manch for new generation, Chitrahaar for music lovers and Theater workshops for theater fans and brought variety of audience from the community closer to Hindi language and culture thru these cultural events – which is precisely one of the key objectives of Hindi Manch,” Shrivastava said.

Here is a list of singers and songs they sang during Sunday’s Chitrahar program: