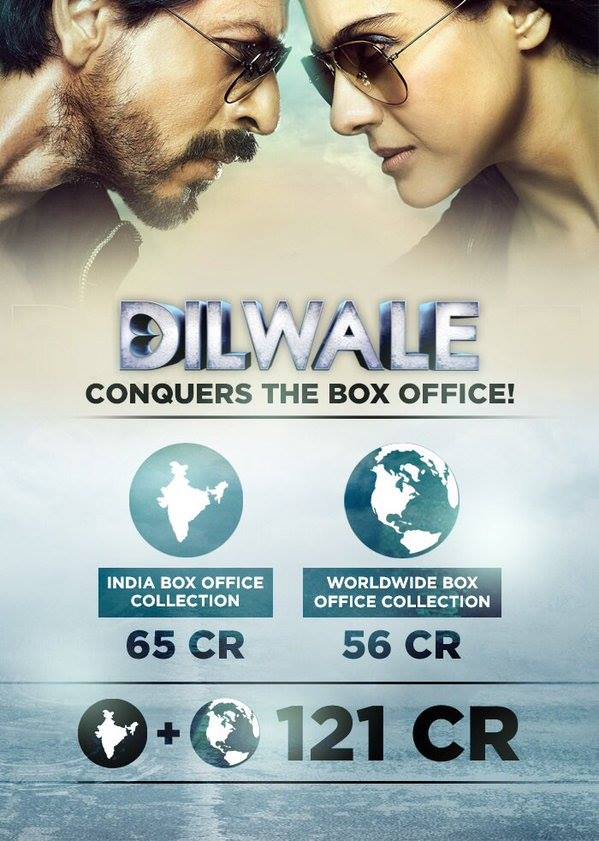 “Dilwale”, Rohit Shetty’s romantic action-comedy, has collected Rs.121 crore in its opening weekend worldwide. It’s India business stands at Rs.65.09 crore, and it made $8.5 million (approximately Rs.56 crore) from the overseas market. Both the films released on Friday.

“Dilwale Overseas: Gulf – biggest ever opening for a Bollywood film, and the number one film this weekend, higher than ‘Star Wars: The Force Awakens’ and other films,” Nahta posted on Twitter.

The collection of “Bajirao Mastani” witnessed a good hike over the weekend and the film is going strong in theatres with positive word of mouth, according to trade analyst Taran Adarsh.

“Bajirao Mastani” made Rs.12.80 crore on its opening day after releasing in 3,050 screens in India, while it is reported that “Dilwale” made its way into as many as 2,700 screens.

As both films are made on a budget of over Rs.100 crore, the coming days would be crucial for them in theatres.

There would be no competition for “Dilwale” and “Bajirao Mastani” on Christmas and January 1, so they will have sufficient time to prove their mettle.

Swara Bhasker: Picking roles that span across genres important to me

Kiara Advani: My journey has been special

Utkarsha Naik: Opened theatre to give talent a platform