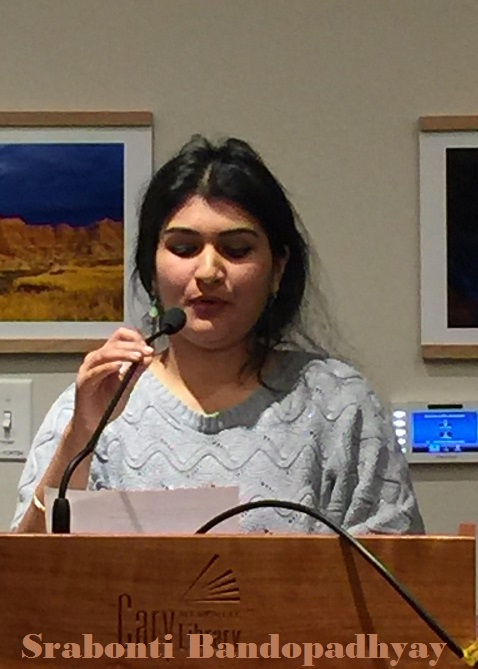 “Inside my mind, I heard a voice, slowly I lifted my hand and the voice became the pen… and then the pen became the voice of the people …”

On Sunday Nov. 21, South Asian Poets of New England (SAPNE) held their quarterly meeting at Cary Memorial Library in Lexington. Started as India Poetry Reading in Harvard University in 1997, the group completed eighteen years of its activity last August. The original meeting was to celebrate the fiftieth anniversary of India’s independence with a theme on “Voice of Liberation”. The group wished to revisit the creativity of the poets in the subcontinent and its own voice from the new society. A program called “Voice of the People” was hosted by inviting the members to recite memorable and influential poems by their favorite poets and then to follow up with their own poems. The idea was well received. It became a memorable afternoon of literary appreciation, nostalgia and enjoyment. 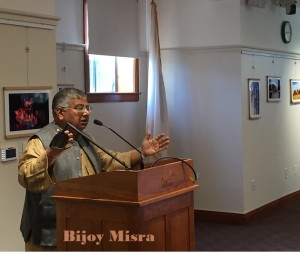 Bijoy Misra, the Convener of SAPNE, called on poets to create a garland where the each flower would be chosen in relation to the previous flower. SAPNE is a multi-language assembly that celebrates the diversity of human experience. Through a connected stream, the poets help develop a story. The story in the meeting could be summed as “With the Mother’s blessings, move on..” 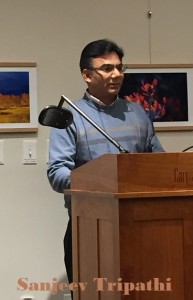 Sanjeev Tripathi opened the program with a Hindi poem “Tufano ki or” by Dr. Shiv Mangal Singh ‘Suman’. The poem depicted the courage of people and how they need to steer their boat towards the storms. They must stand against the adversity and fight. Mr. Tripathi followed with the recitation of his own poem “Chaar Panktiyan” on the similar note to show the path to the undecided individuals to gain courage by remembering four lines of inspiration.

Alok De recited a poem by a not so well-known Bangla poet, late Sri Satyendranath Dutta. A powerful writer, who died young, he declared that all human races on the Earth are one! After rendering the poem, Mr. De recited his own poem on Subhash Chandra Bose, the maverick Indian freedom fighter. Subhash Bose represented the youth and gave momentum to India’s struggle for freedom including the phrase “Jai Hind!”

Bijoy Misra presented an Oriya poem “I am Hindustan” written by his late father Sri Manmohan Misra. Written in British jail in 1946, the poet declares his determination for liberation. He announces his readiness to take up the challenge of reconstructing his nation. He celebrates India’s diversity. Mr. Misra recited his own poem “I am a South Asian” in English. Written for the students of the South Asian Club in a local University in 1998, the poem celebrated the heritage of South Asia and called upon the youth to reach new heights. 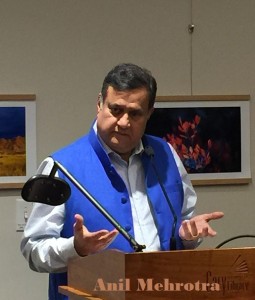 Anil Mehrotra started his poem with a hope for just one year of peace! He molded the thoughts towards the mother by reciting poems by famous Hindi/Urdu poets Rahat Indori and Munawwar Rana. Poet finds heaven in mother’s lap and wants to become a child again. He added his own verse that he, an insignificant in life, has become significant with the care of his mother. 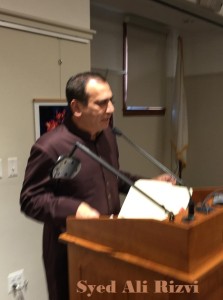 Syed Ali Rizvi emotionally rendered a poem on Mother by Urdu Poet Payam Azmi. A mother goes through difficulties and trials in life to raise her children. She protects her children by putting herself as a guard around them! The poem was a strong follow up to the previous poem. Then Mr. Rizvi proceeded to recite a composition of his own based on love. 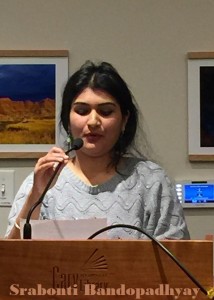 Shrabonti Bandhopadhya continued with the reflections on mother by reciting a poem titled “Clouds and Waves”, in Bengali by Indian Nobel Laureate Rabindranath Tagore. The great poet sees himself as waves seeking for the mother’s shore! It is like a child who finds refuge in the mother’s arms. Then she read her poem Sharanya in English on her own refuge – which is in dance.

Durga Subramanian recited verses from Kambaramayana in Tamil. The Tamil version of Ramayana by Kambar, is an adaptation to the context of the local culture. It is as beautiful and as melodious as the original version. Five basic elements (Earth, water, fire, air and space) are depicted in the rendition with thoughtful imagery. Sita is born from the “Earth,” and is flown in the “Sky”. Hanuman, the son of “Air”, crosses “Water” and creates a “Fire” in Lanka. Then Ms. Subramanian recited her poem celebrating the seasons. She added a few lines from her husband’s composition. 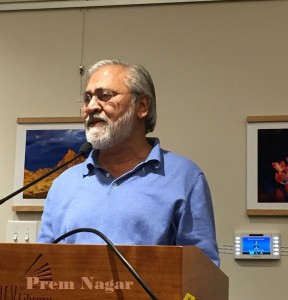 Prem Nagar recalled the contributions of Bharata, the sage, the author of Natyashastra. Without quoting specific verses, he took the entire theme and presented a philosophical outlook of the composition. Human living is a function of sentiment, the ever-changing “rasa.” All receive rasa and they transmit rasa. The universe is an inter-play of rasa. His composition rendered in Hindi was new and novel. He said it represented his own research in the field.

Chandrakant Shah recited a poem by famous Gujrati poet Uma Shankar Joshi about the Gujarati language. The poet expressed pride in his language, the legendary poets and the heritage. The language is the basis of a people. Mr. Shah then recited his poem ‘Brand new Jeans (Genes)’ to show how the language can capture the imagery. A newly married girl migrates to the USA. She feels like as if she was wearing a new pair of jeans (Genes). As she washed them, they shrank a little and fit better. Gujarati puns were well simulated in this beautifully rendered poem.

The session was coming to the concluding parts of the garland. Mahesh Sharma chose to recite a poem in English written by his daughter Prageeta Sharma. Entitled “A Poem for Leigh Hunt,” the poet tries to find ways to keep a sense of peace. It is not an easy process. Mr. Sharma recited his own poem titled “Autumn and the Dog.” The poet enjoyed to express the dog’s joyful happiness on the velvet floor of colorful fallen leaves.

Sajed Kamal recited a Bangla poem by the famous rebel poet Kazi Najrul Islam. A prolific author of poems, stories, plays and essays, Kazi Najrul championed equality of human beings. He called for the dissolution of all barriers in religion and race, and of all temples, and places of worship. There is no temple greater than the human heart! Mr. Kamal presented the translation from his own book. Then he recited his own poem praying for peace in the world!

As a fitting contrast, Maya De recited a poem by Tagore where the great poet reminds us that life is not a dream but a penance of pain and suffering until death! The poem contained excellent imagery. In her own poem, she talked about the tumultuous times we are living now. She wondered if it was possible to ban all religions so that only religion of humanity could shine!

Amandeep Singh sang a Punjabi poem “Sunehda” by the famous Punjabi poet Amrita Pritam where poet convened all poets to write about the oppressed people in the world. Peace is harmony and equality. The poet prayed for peace as one olive branch of peace can add beauty to the life’s nest! In his own poem, Mr. Singh wished for all the soldiers of the world to return home so that clouds of peace can cover the world!

Shiva Gautam paid homage to all Nepali legendary poets and offered a poem to reflect the sentiment in the tradition. Life is love. There are mountain tremors in the Himalayas and there were tremors and jolts felt inside one’s frail heart when the beloved wanted to take leave!

The poem was a great end to a lovely afternoon. Bijoy Misra thanked all participants and the volunteers from India Discovery Center who hosted the meeting. The hospitality was coordinated through Krishna Gazula, Sanjeev Tripathi and Chandrika Govardhan. Rosie Kamal and Srabonti Bandopadhyay did distribute snacks to the attendees.

The next meeting of SAPNE would be scheduled in February, 2016. The program would be entitled “Voice of the Youth and Mothers”. Young people and mothers would be encouraged to recite poems in any language of their choice. You can contact Chandrakant Shah at chandu420@gmail.com, or Sanjeev Tripathi ay sanjeevkt@hotmail.com or Bijoy Misra at misra.bijoy@gmail.com for participation.