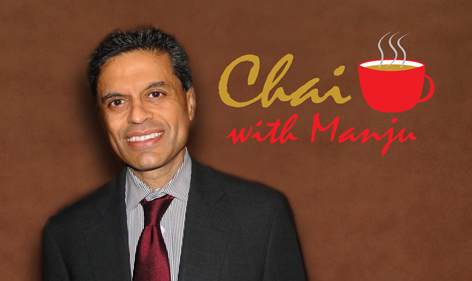 Author Don DeLillo once said: “America was and is an immigrant’s dream.” And this crossed my mind when interviewing journalist, foreign policy analyst and author Fareed Zakaria, an extraordinary Indian immigrant, who has made his American dream come true and inspired us all. He is the son of well-known Indian politician Rafiq Zakaria and journalist Fatima Zakaria. He started his journey as he says in a “salaried middle class family with enormous possibilities and wonderful sense of opportunity.” His passion for international affairs led him from India to the United States where he says “people are judged by their talents and not by their origins.”

Fareed Zakaria has been called one of the most influential and original voices of American foreign policy. His show “Global Public Square” on CNN is one of the most watched shows and his book “The Post-American World” is receiving rave reviews. We are very fortunate in this edition of Chai with Manju to get a rare look at the man behind the famous persona and learn about his work, including the most interesting person whom he has interviewed and also about the one interview that he still wishes for. We also learned about many facets of his exciting life, including meeting his wife Paula on Valentine’s Day in Boston on a blind date and also about important life lessons. It is truly a fascinating journey that we feel very privileged to share with our readers.

Your latest book “The Post-American World” has received superb reviews. How did you get the idea for this book? Did you your Indian background help you in any way to formulate this book?

I got this idea really because of combination of things as I was travelling in late •90s and 2000 in different parts of the world. As I travelled, I saw there was a different mood in the Third World, including India. There was a lot of confidence, as well as competence in the Third World at the cultural and political levels. It was a very different world. I started with these impressions, added anecdotes and then the data, as I am an economist, to my stories. Of course, my Indian background helped me enormously. I used to travel every year to India since 1982, and it was the same snapshot, but then suddenly in the 1990s everything changed. That snapshot became a movie.  There was palpable energy in towns like Aurangabad as more highways and malls were built.

In the chapter “A Non-Western World” you say “strength is weakness.” Can you explain what you mean by that? Can that also be applied to human beings?

Yes, strength is weakness and can be applied to people, too. If you think of the United States since the end of the Cold War, we have become lazy because we do not have competition. In a strange way, the Soviet Union kept us on our toes and we founded NASA, went to the moon, built highways and as President Eisenhower said when building highways that if we were attacked by Soviets then we could move faster on Highways. Lack of competition makes you lazy. One of things that I still think is wrong is that we are under-investing in education.

Your dad Rafiq Zakaria was a politician and mom Fatima, was for a time, editor of the Sunday Times of India. What was it like to grow up in such a household and who inspired you more and why?

Honestly, it was an absolute joy to grow up in such a household. Contrary to what is said often, we were not rich. In fact, we were middle class. My dad was a very honest politician and my parents were both salaried. It was a very modest salary. We lived in circumstances, however, where we had enormous sense of possibilities. We met a lot of interesting people. The thing that I remember most vividly was that we would have poets, politicians and movie stars at the dinner table. That gave me a wonderful sense of opportunity. You could imagine being anyone and doing anything. My mom was also a very traditional householder. She was the constant presence in the day-to-day life and at school. My dad never came to school as was typical in that generation, except when he was the guest of honor and to give away prizes.

What made you decide to move to the United States from Mumbai?

I was interested in international affairs. The international canvas seemed so big here with the United States being the most powerful country in the world. Whereas India in the 1970s was doing badly like most Third World countries at that time with socialism, inflation and the declaration of emergency. Against that back drop my prospects and coming of age did not look that good in India. Interestingly, the bright kids in those days like from IIT, etc., left India and the rich kids stayed back.

Who has been the most interesting person that you have interviewed and why?

Lee Kwan, the founder and first prime minister of Singapore. Many politicians are not deep thinkers and most deep thinkers do not have a practical bone. He was both. He took a sandbar and created Singapore, which has more per capita GPD than Britain. It is the most successful city/country in the world. It takes enormous amount of willpower. You could talk to him about anything including philosophy. Henry Kissinger once said that it was an immense political tragedy that he had immense political talent for a small country.
Is there anyone that you want to interview and why?

Vladimir Putin. He is a very smart guy. I have met him but not interviewed him one-on-one. He is probably much smarter and more brutal than people think.
You are of Indian origin and have been called the most influential and original voices of American foreign policy. What are your own thoughts on that?

It is deeply flattering. One good thing about America is that people judge you by your talent and the work you do and not by your origin. President Regan had once said “We are not interested in people’s origin but in their destination.” America today has the ability to celebrate an individual without worrying about their caste or creed. What is striking about America today is that we are creating a universal nation where people blend in.

Which politician do you admire the most and why?

At the end of day, it will be my father because of what he accomplished. He grew up as an orphan in a small village, got a scholarship to elementary school after he wrote a letter to the principal. He again got a scholarship to Bombay University and then to London. He got a Ph.D. and law degree in London and started a law practice before he joined politics. He also wrote 14 books. I admire him from where he came and where he went and the distance he travelled. What he was able to do in one lifetime was quite extraordinary.

You have received so many awards including Padma Bhushan. Which award is closest to your heart and why?

It was the honorary degree that I got from Harvard last year when I gave my commencement speech. I got my Ph.D. there and it was a training ground and dazzling place to be. Harvard is truly like no other place in the world. Getting the award gave me deep pleasure and it was also a very humbling experience.

You have been called the Indian reincarnation of Cary Grant. What do you think about it?

It was very flattering. My kids keep me very, very honest .You should come to my home and will see that I am not treated in any special way.

Where and how did you meet your wife Paula? What was the first thing that you noticed about her?

It was sort of a blind date in Boston 19 years ago, set up by friends that we had gone to college with.  It was Valentine’s Day and she walked in with a heart shaped raspberry tart. She had remembered at the last minute that she was supposed to bring dessert and this was the only dessert left in the bakery. I thought she was interested in me because of her heart shaped dessert. We still laugh about it. She has a wonderful sense of humor.

What is the best advice that you have received in your life and from whom?

I received the best advice at a very young age. I was a mischievous kid at Cathedral High School, and one day, standing outside the classroom, Vice Principal Mr. Bose was walking by and he came to me and said let’s go for a walk, and he talked to me that I should have big ambitions, not to throw away my talent and opportunities. Somehow, his words always stuck with me and I have always remembered them.

What is the best advice that you have given to your daughters Lila and Sofia?

My children do not take my advice but the best thing that we can do for our children is give them the power of unconditional love.

Work is … Fun.
Family is … Even more fun.
Love is … Beautiful, but also challenging.
Fame is … Pleasure except on a few occasions.
Marriage is … Great joy but also work.
Money is … Gives you freedom.
Home is … Comfort.
My favorite travel destination is … Turkey where East meets West.
My favorite hobby is … Reading.
My favorite quote is … By Gandhi … “Be the change that you wish to see in the world.”
My favorite movie is  … Woody Allen’s “Annie Hall,” though I have watched “Sholay” many times.
My favorite song is … By Lata Mangeshkar … “Allah Tero Naam Ishwar Tero Naam.”
My favorite singers are … Lata Mangeshkar and Ella Fitzgerald.
My best quality is … I am a warm person.
My weakness … I can avoid problems rather than deal with them.
Secret of my fitness is … A lot of exercise, play tennis and go to gym regularly.
Secret of being a good boss is … Genuine delegation and making people feel that they are in-charge.
My favorite author … Scott Fitzgerald, Samuel Huntington and political philosopher Alexis de Tocqueville.
My last word on Chai with Manju is … chai is my favorite drink.

Every life has a story, share it with INDIA New England over “Chai with Manju,” an exciting, innovative and riveting series featuring interviews with some of the most interesting, active, accomplished, amusing and entertaining men and women. Conducting the new interview series is Dr. Manju Sheth, a well-known physician at Beverly Hospital and INDIA New England’s 2011 Woman of the Year. She is also president of Indian Medical Association of New England. Sheth leads and is involved with numerous professional groups, charities and advocacy organizations, and will be profiling people who have compelling stories to tell. If you or someone you know has a compelling story to tell, you may contact Sheth at chaiwithmanju@gmail.com  or INDIA New England Editor Martin Desmarais atMJD@IndiaNewEngland.com.