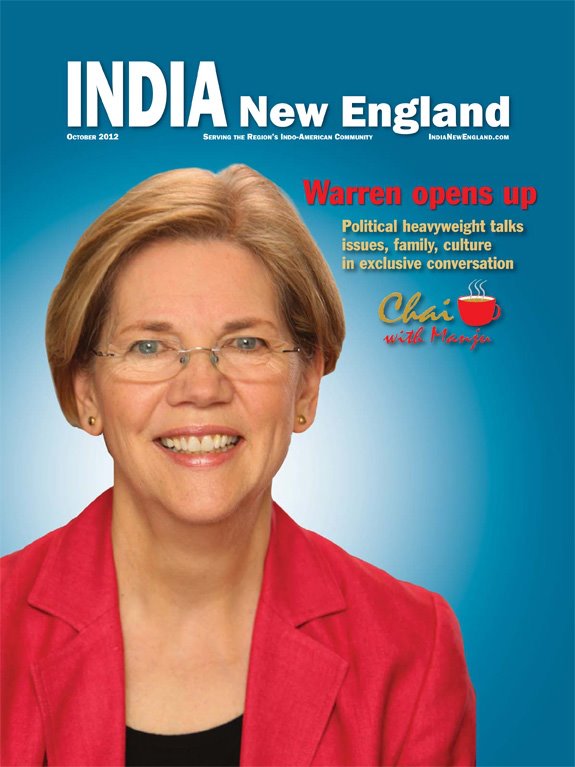 Elizabeth Warren is the Democratic nominee in the 2012 U.S. Senate Election in Massachusetts. She has strong ties to India as her daughter Amelia Warren Tyagi is married to Indian native Sushil Tyagi, a movie producer who has worked on films such as “Samsara,” a documentary by director Ron Fricke which was just recently released in the United States.

Warren is a bankruptcy law expert and professor at Harvard Law School with a law degree from Rutgers School of Law. She is credited for helping establish the U.S. Consumer Financial Protection Bureau with her work as a national policy advocate. With this office, she served as assistant to the President and special advisor to the secretary of the treasury. 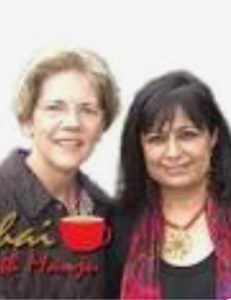 While Warren may have made many headlines questioning her heritage to “Indians” during her campaign to challenge incumbent Republican U.S. Senator Scott Brown, one thing that is not in question is her understanding of the lives of Indian Americans with her connection to her daughter’s husband Sushil. In an exclusive and candid interview with INDIA New England, Warren discusses topics she knows are of concern to Indian Americans and speaks directly to the community, as well as sharing some personal insight on things close to her heart.

Have you visited India or had any exposure to Indian culture?

My son-in-law and the father of my three grandchildren emigrated here from India as a young adult, so it’s an important part of our family. His story and countless stories from millions of other families reach back for generations, creating our uniquely American story.

What do you think of the current state of India-U.S. relations? What would you do to strengthen the bilateral ties further?

India and the United States have a strong and growing relationship. I support ongoing efforts to build cooperation between our countries on global economic, political and security issues. I believe India and the United States should continue to work together to strengthen our bilateral ties, support economic development and promote international security in South Asia.

Do you have any message for the Indian and South Asian community?

Massachusetts has a strong and vibrant Indian and South Asian community that makes significant contributions to our cities and towns. I am proud of Massachusetts’ diversity, and as Senator I will work to create opportunities for all our families to have a fair shot at success.

Immigration has been a big issue for many years and is an important issue to the South Asian community. What is you position on the issue of immigration? Do you think the issue will have an impact on your election?

Throughout our history, America’s diversity has made us stronger, more innovative, and more creative. That’s why I support common sense, comprehensive immigration reform. I believe we need reform that is true to the rule of law, to our tradition as a nation of immigrants, and to our need to invest in the future.

And that’s why I support the DREAM Act, and President Obama’s efforts to help young people who have lived in the United States for years to have a shot at the American Dream. Even though it is a fair and bipartisan bill, Republican Scott Brown has opposed the DREAM Act.

You have been called many names including “New Sheriff of Wall Street.” Is there any name that you like the most and why?

My grandkids call me “Gammy,” and so that has a special place in my heart.

Who is your role model and how does he/she inspire you?

I’m a big Teddy Roosevelt fan. He led the charge against the big trusts, he had a strong record on conservation issues, and he worked to protect consumers by signing the Food and Drug Act, which was the foundation for the FDA. He fought hard to create a level playing field for working families.

What did you learn most from your parents and what advice do you give to your kids the most?

My parents are gone, but I think of them every day. They never had much, but they worked hard, knowing they were raising four kids in an America of expanding opportunity. I have three grandkids now, and I am deeply committed to giving them — and all our kids — a chance to grow up in world of growing opportunity. That’s why I’m in this race.

If elected, what are the first three things you would like to accomplish in the Senate?

Jobs. Throughout Massachusetts, there’s work that needs to be done and people who need jobs. In the short run, we can put people back to work repairing roads and bridges, upgrading communications, and making sure we have teachers in the classroom and firefighters in the fire station. We also need to start now to develop our plans to invest in education, infrastructure and research. This helps create the right environment for businesses to grow and opportunities to flourish. We need to start executing on our plan to build a future.

Big Corporate Accountability. Washington is rigged for the big guys — for big oil companies, big banks and Wall Street, big corporations, the businesses that can afford armies of lobbyists. They get the special deals on taxes — hiding money overseas, special subsidies for profitable oil companies, breaks for hedge funds — and they leave working families and small businesses to pick up the bill. We’ve got to level the playing field for small businesses and middle class families so they have a real chance to get ahead.

Higher education. It has become more and more essential for young people to get some kind of post-high school education — whether college or advanced technical training. We have a choice: are we going to tell our young people that they are on their own, or are we going to invest in them — and in our own future? I believe we must invest in our future, and that means investing more in our public colleges and universities. It means supporting advanced technical training programs, and it means getting serious about strengthening grant programs and forgiving loans for those that serve their communities.

Name some of your favorites:
Movie: Casablanca
Singer: Patsy Cline
Book: The Little Engine that Could
Food: Pasta
Travel destination: Visiting my grandchildren
For any interview suggestions, please contact Manju Sheth at chaiwithmanju@gmail.com.